Do you sometimes wonder if your child is lying to you? Or maybe you have caught them in a lie. What do you do? How do you get your child to stop lying?

Lying is an unfortunate part of life that children (and adults) will sometimes resort to when it’s in their best interest. However, if lying becomes a regular occurrence, you may not believe what they say because everyone knows honesty rocks!

But teaching your kids the importance of telling the truth helps establish self-responsibility, trustworthiness, and caring character traits for tomorrow’s world leaders.

Let’s cover how to get your kids to stop lying and have them want to tell the truth instead.

How To Stop Your Child From Lying

When it comes to lying, children and adults do it because it is a strategy.

To establish honesty, you must be being

1. Honest with your children

Create a household rule to ensure honesty and truthful communication. This will help your children understand that you value the truth, even when it’s hard.

Often, parents think that when they find out or catch their child in a lie, their child needs to receive some kind of harsh punishment. But what parents don’t realize is that if they become upset, they are making the problem worse.

Be open to hearing what is being said

Take note of the circumstances they are in

Ask more questions rather than assuming

Keep in mind that lying is a strategy if you find out that your child lied days or weeks ago. Don’t take it personally. Use this as an opportunity to teach your child about the importance of honesty and discuss the reason they lied.

Most parents want to know the reason “why” their child lied. But asking “why did you lie” is not a question; it’s a statement, and that statement is going to raise your child’s defenses.

Try your best to

If you ask “why,” you are most likely to get answers that you are not happy with or no answers at all. This type of accusatory statement will create tension between you and your child because it triggers the flight it frights in their brain. That is not what we want to do because we won’t get anywhere by asking “why,” instead of asking “why did you lie.”

“You told me you fished cleaning your room, but I know that you just shoved everything under your bed.”

“Honey, you told me that you finished your homework, but I don’t fully believe that.”

“You told me you didn’t play any video games today, but I know that you did.”

So with that in mind, when you catch your child in a lie, respond in a calm matter and identify what happened.

Parents want to communicate to their children that they believe them by having open ears and open minds. It is most effective when parents can be calm, even if they are frustrated because this allows you and your child to talk without being fired up. So with that being said, the next step is

6. Don’t talk if both people are fired up

When both parent and child are fired up, or even one of you is, the conversation will go south very quickly. This is because when a person is fired up, and they are in flight or fright mode, the area in the brain that helps a person listen and communicate effectively shuts down.

Dr. Paul Jenkins from Live On Purpose says, “don’t respond until the adrenaline is gone” It is important for both parent and child to be calm before having this conversation about lying. What if your child is not calm? Hold off and wait until your child has a calm face, a calm voice, and a calm body.

Once you and your child are in this calm place, this would now be a good time to let your child know why they felt the need to lie and you…

This can be done by stating the reason why YOU think your child lied. You may want to say something such as.

“Maybe you were thinking that if you lied about not playing video games you wouldn’t get your video games taken away. Is that correct?”

This is not a time to grill your child about not lying or giving them unwanted advice. Instead, you want to drill down by asking your child questions like

“what do you think you can do next time instead of lying?”

“What could you have done differently to get the same result instead of lying?”

By asking what your child thinks they should do differently. This is important because it allows your child to take ownership of their choices. If your child doesn’t know how to develop a solution, you as the parent should suggest some possible solutions.

When parents drill down, they will find out if their child was motivated by something. If so, what? Then the next thing is to give your child.

9. The Right Tools For Success

Instead of telling your child “don’t lie,” Tell them how they can succeed by solving the problem and telling you the truth.

You can say something like this “If next time you have a question about what to do, then I would love for you to come and ask me.”

“When it is hard for you to remember if you played video games or not, it would help if you wrote your video gameplay down on a sticky note.”

With this approach of guiding your child towards success instead of harsh punishment, children will likely respond better.

It can be frustrating to a parent when their child lies. Before you get too upset at your child for being dishonest, it’s important to understand why children lie in the first place.

There are a few different reasons why kids might lie. One is simply because they don’t yet understand that lying is wrong. To a child, lying might just seem like a way to get what they want or avoid getting in trouble.

Another reason why children might lie is that they’ve seen adults do it. If you’re regularly stretching the truth or bending the rules, your child is likely to pick up on that and start doing it themselves.

Here are a few other reasons why a child may lie:

as frustrating as it is when your children lie; they do it because it works.

Many parents are quick to want to punish their children when they found out they lied or catch their child in a lie.

While it’s certainly understandable to want to discipline your child for being dishonest, it’s important to do so in a way that will teach them not to lie.

Here are a few things to keep in mind when you’re disciplining your child for lying:

Try to avoid reacting in anger. It’s important to remain calm when you’re talking to your child about lying. If you get too upset, your child is likely to tune you out or become defensive.

Explain why lying is wrong. Help your child understand why it’s important, to be honest.

Children Who Are In The Toddler Years (2-3)

Children this young are not lying to deceive. So the best thing you can do is to respond to the lie calmly and with facts. Use simple terms layout or point out the evidence of the lie and help your child start to identify right from wrong.

At this age, your child will be exploring and testing the world around them. As a result, it’s important for you not only to provide opportunities but also boundaries so your children can understand what is expected of those who tell the truth.

Be open with discussing how honesty works and help them to understand that everyone makes mistakes but it’s important to own up to those mistakes.

If your child is caught in a lie, avoid shaming or belittling them. This will only make them feel worse and be less likely to come to you with the truth in the future.

By now, your child understands that telling a lie is wrong but she also knows how to get around doing chores or completing projects.

Their desire for fun overrode any sense of responsibility; this includes misleading people into thinking something else so they won’t be mad at her (manipulating), as well avoiding an uncomfortable situation by telling lies—even if those fibs could cost you later down the road!

You should focus more on building skills through playtime activities instead punishment when teaching kids these important life lessons early.

Most kids want to do what is right but like more humans when things get difficult or when they don’t have the skills to deal with a situation they will choose what is easiest.

If you find out your child lies about something. Find out why by following the steps above.

The best way to deal with this is by modeling, which will make the child feel more comfortable in everyday situations.

The middle school years can be a tough time for many children. Children may lie to fit in, get out of trouble or regain control after being told no by their parents. Often at this age, we are not ourselves but instead trying our best just like everyone else, so help your child understand how his actions affect others around him!

Helping your children understand the consequences of lying will make them think more before he tells lies. Helping them see why limits are put in place can be a difficult thing for some people, but it’s necessary if you want to teach integrity and responsibility

At What Age Do Kids Start Lying?

Lying is a common thing for children to do, especially when they are little. From 3 years old or earlier on in life it’s not uncommon at all that your child might realize you can’t read their mind. So he/she will say things which aren’t true without always knowing about it beforehand!

First-time lies come along around this time too- between the ages 4 – 6, most kids have perfected telling big elaborate Fake News Stories with matching facial expressions & tones of voice while saying everything just right except being told directly by mommy.

It’s normal for children to lie, especially when they are little. It’s important to teach them the consequences of lying and help them understand why limits are put in place. By helping your kids to stop lying they will start to see why honesty is important will make them more likely to be truthful in the future.

When you find out that your child has lied it’s important to remember to stay calm and openly and calmly discuss why your child felt the need to lie. When children feel like their parents are going to listen and instead give some harsh punishment. Children till less likely to lie and more likely, to tell the truth, because they want to. 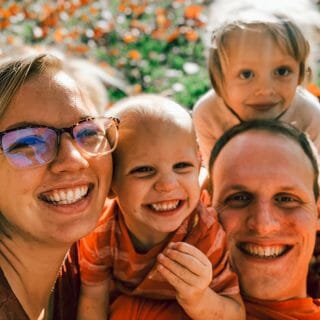 Kara is a Toddler Mom Parenting Coach and author. She helps parents with toddlers who are struggle with tantrums, potty training, or getting their toddler to listen. She understands how hard it is being a parent and how challenging it can be to break old generational parenting patterns and form new ones. Through her own struggles as a parent she has found a life of peace and gentle parenting and has given her the ability to break old habits such as yelling and punishing and become a more calm, connected and patient parent. When Kara is not coaching you can find her outside with her 2 children, traveling with her family, reading books, and occasionally binge watching The Office or Friends.